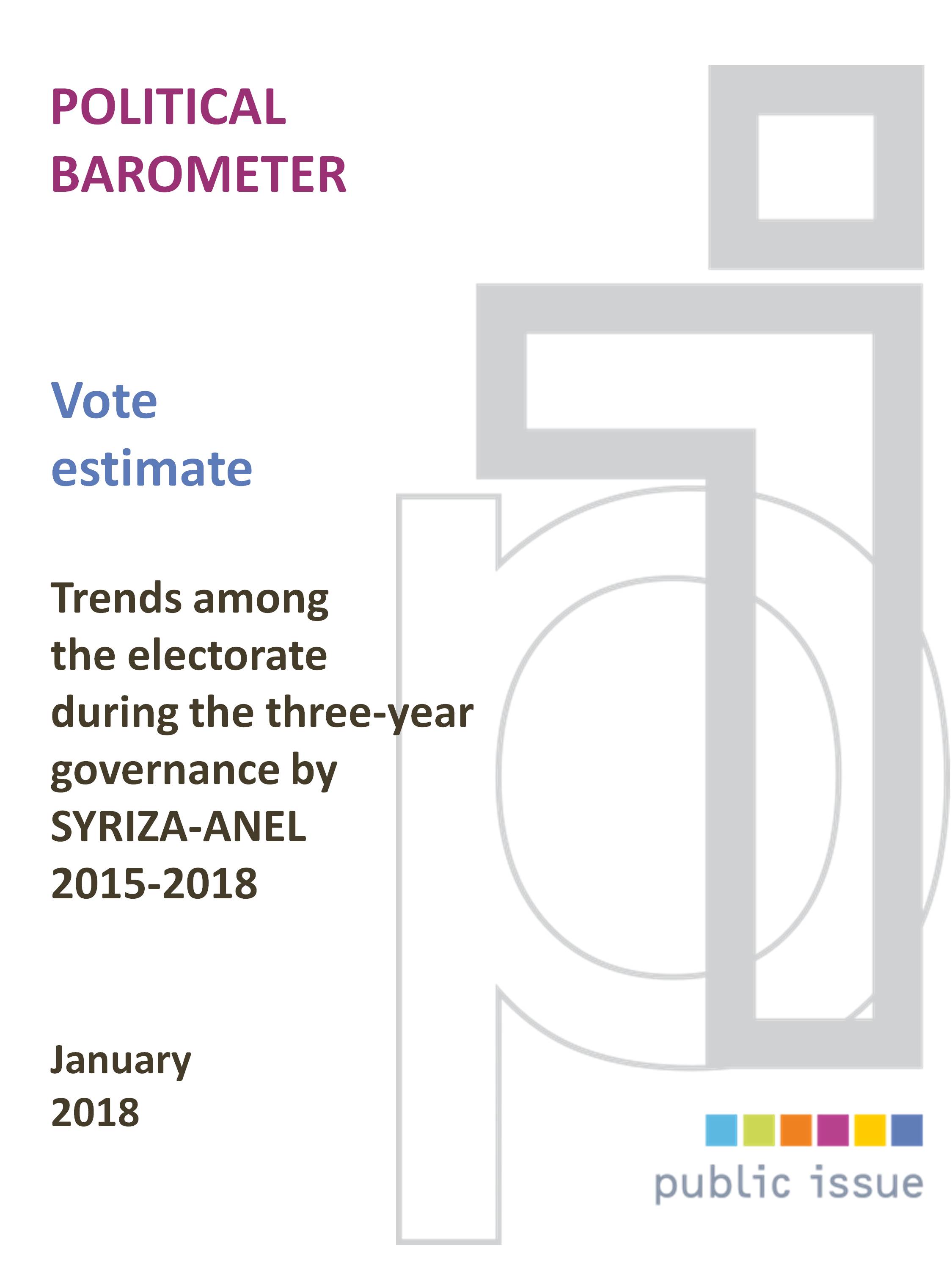 Vote estimate – Trends among the electorate during the three-year governance by SYRIZA-ANEL, 2015-2018, January 2018 The ‘gap’ is closing, but remains wide

On the basis of Public Issue’s vote estimate for January 2018, the following main conclusions emerge: From the estimate of voter support for parties, a number of firm conclusions (‘certainties’) emerge, in the event that an early general election is held in the near future:

b. The next Parliament will have fewer parties than the present one. According to the estimate, it is most likely that only five (5) parties will secure seats in Parliament: ND, SYRIZA, Movement for Change, Golden Dawn and the Communist Party of Greece. Two (2) parties still have strong possibilities: Union of Centrists and Independent Greeks. In contrast, neither The River nor any of the parties not currently represented in Parliament (Popular Unity, Course of Freedom, etc.) appear likely at the present time to win seats. Consequently, the number of parties in the next Parliament is expected to be definitely fewer than the current number.

c. The party system is being re-stabilized. The signing of the Memorandum in 2010 provided the catalyst for the reconstitution of the two-party system. After the ‘twin’ elections of 2015, it appears that a new balance is being created. The new shrunken two-partyism (ND-SYRIZA) seems to be becoming consolidated, at levels which in the past year have been limited to around 61%-62% (Figure 3Α).

ND, while recovering significantly after the elections of September 2015, again approaching voter support levels of 2007 (43% in summer 2017), did not manage to remain at these levels and in January this year reverted to the levels of early 2016 (37%).

At the same time, several of the parties that were formed or became more prominent during the period of the Memorandum (Democratic Left, Independent Greeks, The River) have already been absorbed or are in constant decline, while support for Golden Dawn shows no change at the present time (Figures 2Β,2C).

d. Movement for Change in third place. It now clearly emerges from the vote estimate that the new party entity that resulted from the process of reconstitution and transformation of the Center-Left appears to be the main candidate for third place in the electoral competition. At the same time, the election of Fofi Gennimata as head of the party has significantly strengthened her leadership image (+5%), recording the lowest negative balance of popularity of the past two years.

e. Abstention will be around the levels of January 2015. The average intention to abstain and anti-party vote (blank/void) during the current electoral cycle is 21%, very close to the levels of the 2012-2015 electoral cycle (18%). The significant decline in intention to abstain in the current survey (8.5%, down from 15% last October) is worth noting. At the same time, the levels of undecided voters (11.5%) are the same as those in the 2012-2015 electoral cycle. Consequently, on the basis of the polling data to date, the level of abstention is not expected to exceed that of January 2015 (24.9%).

On the other hand, the estimate of voter support for parties leaves unanswered certain important ‘questions’, which create uncertainties with respect to the next parliamentary elections:

a. Will ND gain an overall parliamentary majority?

At the present moment it is quite close – but such a likelihood has diminished and has become more uncertain as compared to the preceding three-month period.

b. How many parties will win seats in Parliament?

The estimate of voter support for Union of Centrists falls short by just 0.5%, while in the case of Independent Greeks 1% from the threshold for parliamentary representation (3%).

Bearing in mind the margin of error, it is impossible to determine the exact number of parties that will eventually pass the 3% threshold and therefore secure their representation in the next Parliament.

The purpose of each electoral contest is to elect a government for the next four years. As is known, according to the electoral law in force, the percentage of votes obtained by parties that do not manage to win seats in Parliament is the sole factor that determines whether the first party is able to achieve an overall majority  (Table 3). In order to examine the likelihood of ND securing an overall majority in Parliament (151 seats), the possible limits of its parliamentary strength were estimated in three scenarios. In the first scenario – which derives from the point estimate of voter support – it is considered that five (5) parties pass the 3% threshold. The other two (2) scenarios derive by each time adding, from the parties which in the previous scenario did not win any seats, that party which had obtained the highest percentage of votes (Table 2). In the first scenario, ND is very close to achieving the target of an overall majority, since with 37% it is expected to win 156 seats, while it may secure an overall majority, albeit by a slim margin, provided its voter support surpasses 35.5%. The target of an overall majority becomes more distant in the case where there are six parties in the next Parliament, since in order to secure an overall majority of seats, ND’s voter support would have to exceed 36.5%.

In the hypothetical case of a seven-party Parliament, the threshold for an overall majority rises to 37% (Table 3). It is quite clear that if ND’s voter support is close to the estimated lower threshold of 34%, it will be extremely difficult for the party to secure an overall majority, even in the case where only five parties are represented in the next Parliament.

The electoral outlook for the Center-Left

The January survey was carried out after the leadership election of the Movement for Change, the new political grouping of the Center-Left.

In the preceding period, voter support for Democratic Alignment had been constantly rising since summer 2016, in the current month reaching 13%, for the first time since May 2012 (Figures 1Α, 2Α). The formation of the new grouping and the procedure for electing the new leadership served to further boost the already upward momentum of the percentages recorded by Democratic Alignment.

The further rise in voter support for the new grouping of the Center-Left is one of the most important factors which could change the balance of strength between ND and SYRIZA and weaken the chances of ND gaining an overall majority. It constitutes, that is, a ‘key factor’ in the next electoral contest. And the origin of voters who choose the new Center-Left grouping is considered to be of particular importance.

The fact that voter support for ND fell in January for the first time below 40% may be due to the fact that a segment of ‘anti-SYRIZA’ voters of the middle ground, who after the September elections turned towards abstention, not having an outlet for political expression, now seem to have acquired a choice, to the extent that the new grouping appears as an alternative opposition solution. This trend, from a polling perspective, is clearly reflected by the sudden and significant decrease in intention to abstain.